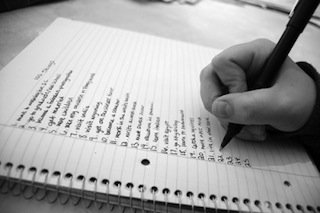 The notorious wedding list. A part of the wedding a lot of couples dread making. Who do you invite, but more importantly, who DON’T you invite? This is a subject that people get oddly offended by. People seem to get touchy and offended by the lack of the invite and just don’t understand the bind you’re in. No need to be ruthless about it, but in a lot of cases, you just cant invite everyone!

Before you even start making a list – which hopefully you can come in under capacity and not have to cut anyone but add people – think about who is involved in your life NOW. Not who was your friend in grade six, not who was there for you when your boyfriend dumped you in grade 10 not even who you spent periodic down time with two years ago, but people who are involved in your life now! A wedding is about optimism for the future, not what your life involved in the past. Sure, you can pad the list later with these people I just mentioned once you find that your venue can hold 20 more people, but don’t think about these people when starting your list.

Have 2 Lists. All though no one likes to classify friends and family into two lists, sometimes it just has to happen when your fighting with the numbers game. Have your main list, then on your second list have place fillers should people form the first list cancel. This isn’t information you need to share with anyone for obvious reasons.

No Kids. First of all it can be a way to attract guests to your wedding reception. A night out for a lot of couples is something they rarely see once they have a little munchkin in the house. Play this to their advantage as a night out together with no children as well as an advantage to your numbers and budget!