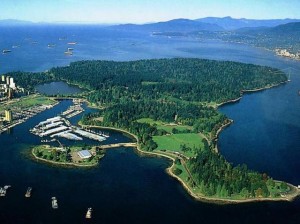 With plenty of venues to choose from in Vancouver and its surrounding area, a seemingly popular one is Stanley park. Stationed on the Northern most part of downtown, this area offers convenience with its close proximity to downtown but doesn’t compromise on the scenery, as the views from almost anywhere on this not so desolate island are quite spectacular.

With four options atop Stanley Park, a view is offered on every side, or in other words, North, East, South and West.

With Brockton Point, Rose Garden, Ferguson and Spanish Banks, theirs bound to be a location to fit your liking, if this is indeed the setting you want for your wedding. Dense forestry, a view of the mountains and a chaotic downtown skyline all are in the bill here. Caps on attendance are in effect however. With the largest of the four holding 120 people, extravagantly large amounts of people are not permitted here. With the smaller end capping at 75 guests, some hand picking might need to be in order. Keeping guest lists low can be a difficult task, as more often then not, you don’t realize the actual amount of people you need to invite. Thats also a long way from the people you feel obligated to invite.

However, any way you look at it, it is sure to be an incredible day, especially with one of these fine venues at your disposal.