The Story of Airwaves

This is the story of how Airwaves Music Started.
(This is a long post-so beware, you will have to read a bit) 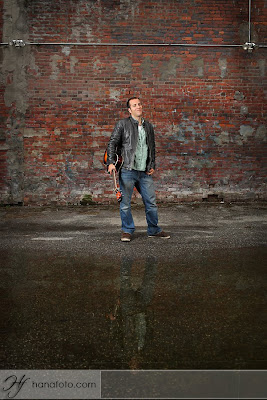 It all started in early 2009. This was a rough year for me. I had always been interested in business but at this point, most of my ideas had been a bit of a failure. I was extremely depressed at that time because I had a degree and still no great work experience. At the same time, I had a really difficult breakup with a girl who I was dating for many years. I felt weak, powerless and extremely let down. On the positive side, I knew that the relationship had been stopping my creative side and so I was happy to have a chance to fully chase my dreams. I wasn’t sure what I wanted to do, but I knew I wanted to have my own business and it had to be music related. I’d also tried a business that turned out to be hard of the environment, so I knew this one had to be “green”. It also had to be something I loved and I didn’t want it to be based on greed. It had to be something I really cared about.

My good friend Les and I decided to try booking gigs together since he was a DJ and I was a guitar player. We knew it was a nice combo to have guitar first and then a DJ for later in the evening, so we decided to give it a try. A mutual friend told me and Les to make sure the business started with the letter “A”so it would be listed at the top in directories. I thought that was a great idea, so Airwaves was born.

I only had just over $100 in my bank account and I still remember using almost all of it to buy some business cards and brochures. I was really poor at that time and that $100 seemed like a huge amount of money to gamble. I still remember how worried I was to spend it on nothing more than an idea. I crossed my fingers and hoped something would happen. I felt like I had nothing to lose and nowhere to go but up, so I just kept telling everyone I knew about Airwaves. I still remember our first gig, our friend Jason’s mom was an event planner and decided to give us a chance. From there, we got one phone call and then two and within a few months, the calendar was filling up and I was auditioning more bands, DJs and musicians to fill the dates. We were in business and I couldn’t have been happier. I felt unstoppable and I was starting to get some real momentum. But then something happened that really could have slowed it all down.
Around that time, I was playing in a rock n roll band. My best friend Jason was also in the band and it was normal for us to go to Kamloops to play the odd gig. One night on the way there, our car hit black ice and rolled onto it’s side, hitting a telephone pole. We hit the pole at 80km an hour and I broke all of my ribs on the left side. I also tore my spleen open and my lung collapsed. I was very close to dying that night and I still don’t know how I was able to stand up myself and climb out of the car despite my injuries.
When the accident took place, Airwaves was busy and we had no managers. Nobody could look after the business but me, yet I was in the hospital and then on pain killers for literally weeks and weeks. Finally when I finished healing, I managed to catch up somehow and get the business back on track. I am not sure how I did that, but it was the first major obstacle to Airwaves. The near death experience also made me question my decision to spend my time and energy working on the company.
I wanted to help musicians and create a network where people could find reliable good music. I also wanted to make a place where good entertainers could easily find work so that they could be full-time musicians and not need any other day jobs. That was always my dream after university and there was no system to help me so I decided to create one for myself and for all the other musicians I knew. That way, musicians would never have the problems I had after college-music could be a real job after all.
If anything, almost dying lit a fire inside of myself that still is there. I decided at that time to use Airwaves to help all the musicians I knew, so that they could make a living with their music. They could gig during the evenings and weekends and the rest of the time, they could write their own music or plan a tour. That was my vision and it really drove me to work long hours. My roomate, his girlfriend and I were sharing a 1 bedroom studio and I was getting up at 5am to work part time at the grocery store (the only job I could find). From there, I got a desk job and I still remember coming home from work and then spending another 6-8 hours on the computer each and every night building Airwaves, returning emails and planning the next phase of our launch. It was really tiring and really hard, but I didn’t care. I just kept doing it day after day after day.
Airwaves started growing quicker in the following months. The small music company had been around for nearly 3 years and was finally doing well. I was even thinking about quitting my new medical job (no longer at a desk) to work on Airwaves full time. But that’s when more bad news came. I noticed something strange going on with my body and shortly after a doctor confirmed my worst fear-I had testicular cancer. At first I was scared I was going to die… then I read the stats and was even more scared about the surgery. Some really important “man-parts” had to go and I wasn’t thrilled with the idea. I underwent surgery and am happy to say I am still cancer free to this day. But this second near death experience within just 1 year of the car accident made me question what I was doing yet again. Was I sure this is what I wanted to do with my life? All of this made me really look deep into myself. I was either going to go all the way with Airwaves or drop it at that point. But I decided to put my life into it and here is why. 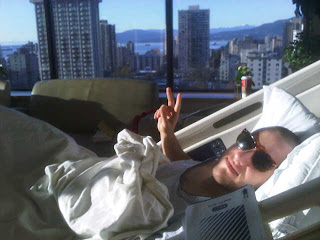 Before the cancer operation-2012. I wasn’t as calm as I look..haha

I think sometimes people wonder what I want or what my motivation is behind Airwaves, so here it is.

Musicians, whether they are guitarists, DJs, songwriters, band members, etc, are all passionate, creative people who make the world a more interesting place. Music is a lifelong challenge and you can never truly master an instrument or a musical style. I think that as a species, human beings have only mastered one thing and that is music. I love it and I love the people who make it. I always have. So my goal is to find the true musicians and to create a network that supports them and their goals. I want this network to be totally positive and sustainable in every way. I want the musicians to feel happy and fulfilled and to have more time during the day to focus on writing music and their creative goals. If Airwaves had it’s way, no musician would need a day job, unless they wanted one of course. People don’t understand how much work it is to be an artist. It takes all day, every day to be truly good at what they do. I’ve had Juno award winners sign on to Airwaves who were going to work at a fast food restaurant. I don’t want that to happen. Do be a great musician takes as much training as it does to be a surgeon and I believe that musicians are just as valuable to the world-just in a totally different way. The funny thing is, I have friends who are surgeons and they agree with me! Music changes everything and makes life amazing.

I want our customers and clients who hire our team to have an unforgettable experience which is made exponentially more incredible because of the entertainment. But more than anything, I want to create something that helps those whom I consider ‘my kind of people’-musicians. I’ve never met a musician whom I didn’t respect. This business also meets my 3 criteria-it doesn’t hurt anyone, it doesn’t hurt the planet and it isn’t based on greed.
I believe that Airwaves has accomplished it’s goal so far. We are helping musicians earn a living, making client experiences amazing and bringing groups of awesome musicians together wherever we go. To me, that is why Airwaves is still here and that is why car accidents, cancer and cashflow have never stopped it from growing. All the hard work is worth it and it’s the funnest job in the world. I am also surrounded by happy, music loving people which is epic and inspiring.
Thanks so much for reading this story and I hope it makes sense to you now why I do it. I’ve almost died a few times, so I needed a cause close to my heart to motivate me. Airwaves does that every single day.
Rock and roll.
Bobby Graham
Founder
Airwaves Music-A Small, But Awesome, Music Company.